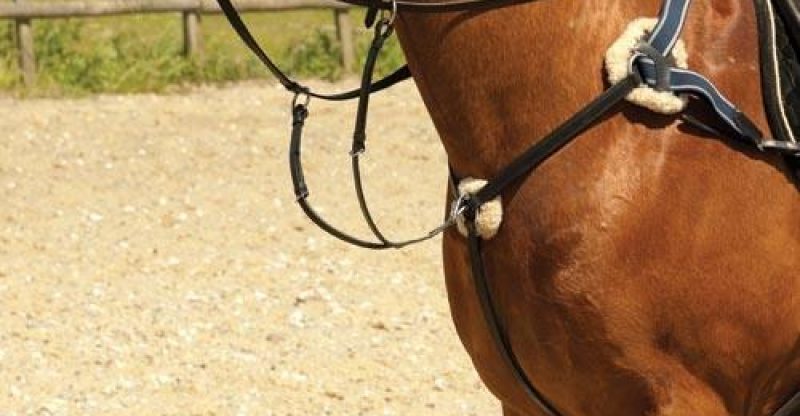 A running martingale is designed to prevent the horse lifting his head too high, and therefore out of the angle of control. This device relies on the correct tension of the reins to maintain control over the head. Attached to the girth it passes up between the horse’s front legs and divides at the upper chest, each strap end has a ring on it through which the reins pass.

TO FIT: Correctly fitted, a running martingale should only take effect when the head is raised very high and/or the head becomes difficult to control, if it is too short there will be a constant downward pressure on the bars of the mouth. A guide to the correct length when the martingale is in place but not yet attached to the reins is that you should be able to take the Straps that attach to the reins to one side and stretch the straps as far as the horse’s withers.

This is also designed to prevent the horse’s head from getting too high, and therefore difficult for the rider to control, but instead of relying on pressure on the horse’s mouth it puts pressure on the nose. This device should only be secured to a cavesson noseband or the cavesson part of a flash noseband and never to the dropped part of any other noseband. The martingale is attached to the girth between the horse’s front legs at one end and to the back of a cavesson noseband at the other end.

Again, as with the running version, to prevent the martingale strap from dropping dangerously low between the horse’s front legs it passes through a neck strap, which should be fitted with a martingale stop, to hold it in place.

This martingale is rarely seen these days. It is a combination of a hunting breastplate and the type of standing martingale that attaches to the bit. It applies downward pressure on the bars of the mouth if the horse’s head is raised very high.

The martingale straps between the chest and the mouth should be long enough so that, when attached to the bit, the straps if pulled up will reach into the angle of the horse’s throat, as with the fitting of a standing martingale. At the bit end the martingale straps should be attached below the reins not above so that they will not interfere with the action of the reins.

This is a standing martingale that is reinforced with chrome leather all along the martingale strap that runs from the horse’s chest to the noseband. Polo is a fast and vigorous contact sport and all the equipment needs to be very substantially made. The polo martingale also has the length adjustment between the neckstrap and the noseband (unlike a normal standing martingale which is adjusted between

TO FIT: It is normally fitted a little tighter than a standard standing martingale but care should be taken not to overshorten the martingale because the polo pony needs his head and neck for balance When making fast turns and halts.

Designed to fill the dual role of running and Irish martingales, this looks just like a running martingale but a solid piece of leather is sewn into the V made by the rein attachments. This acts like a running martingale, pulling down on the bars of the mouth if the head is thrown up or carried too high. Also, if the rider is thrown, the bib piece helps to prevent the reins being thrown over the horse’s head and getting caught up in the front feet.

TO FIT: The fitting of the web or bib martingale is the same as a running martingale and the effect on the horse will be the same as that of an ordinary running martingale. The immobility of the solid leather part keeps the reins in place fairly close together. This part needs to be kept very supple or it can rub the underside of the horse’s neck.

The Irish martingale is designed to stop the reins From going over the horse’s head in the event of the rider coming off and is most commonly seen on racehorses. It is made up of two rings joined by a leather or web strap approximately 4 in long.

TO FIT: The reins are threaded through the rings and the martingale keeps the reins in place just under the horse’s neck. This piece of equipment should always have martingale stops fitted to each rein so that the rings do not get caught up on the buckle or billet fastenings of the reins where they attach to the bit.

TO FIT: The combination is fitted as a running martingale, with the standing part adjusted to act only if the horse’s head is thrown right up above the height that the running part can control. When used on a jumping horse, great care must be taken to ensure that the standing part is correctly fitted so that the horse has enough freedom to jump well.

The tandem is a running martingale that, instead of having just one ring at the point were the martingale attaches to the reins, has a two-point contact. The straps forming the V of the martingale are attached to metal pieces that enable the reins to run through two rings 6 in apart so, instead of the rein being pulled down at one fixed point, the load is spread over a wider area; the idea is that the downward drag on the bars of the mouth is not quite so severe. This also comes with extra rings so that it can be turned into a conventional running martingale.

TO FIT: Fit the tandem like a normal running martingale but pay special attention to the metal pieces to ensure they do not rub the hair of the horse’s neck.