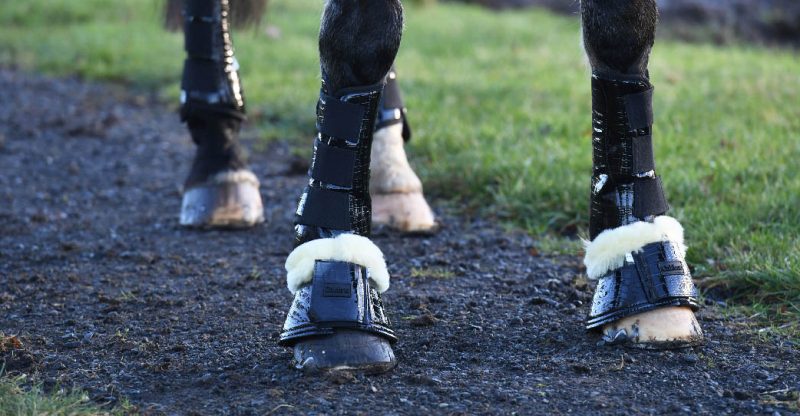 For all forms of schooling you need to think about protection and/or support for the horse’s legs. It will depend on what type of work you intend to do and on the age, fitness and health of your horse as to which type of boot or bandage is going to be most suitable.

One of the most important things to remember if you are using boots or bandages is that not only must the horse’s legs be scrupulously clean and free from veterinary products but so must any boot or bandage that is put on them. Any boot or bandage that is dirty will cause sores and rubs. The majority of brushing boots are made of some form of nylon or neoprene, both materials tend to make the surface they cover heat up and sweat.

According to BVA equine expert Judith Graham: “A lot of medicinal cooling and healing products specifically list in their information that they should either not be covered or that they should not be tightly bandaged.”

Judith goes on to recommend that “It is most important if you have a horse who is in work but who needs a supportive boot or bandage and also some sort of medicinal product applied that you apply the product correctly and stick to the recommended guidelines.”

How to fit boots and bandages

You need to make sure all boots and bandages are put on correctly and are very secure so that they will never come undone and cause an accident. As a general rule you should be able to fit your index finger comfortably into the top of any boot or bandage. They should be the same tension all the way down the legs and any fastening should only be as tight as the boot or bandage itself, never tighter because this creates a tighter band that digs into the leg.

In order to be effective, brushing boots must meet certain standards otherwise it is really not worth putting them on the horse’s legs. The base material must be thick enough to actually afford some protection. The inner pad that runs down the leg has to be a good shape to cover the inside of the leg, and to cup the fetlock joint.

The hind boots should have a larger padded area over the fetlock joint as some horses brush the back lower half of the joint continually. The materials used must be pliable and mould to the shape of the leg. The boot should be long enough to cover the whole area from just under the knee to just below the fetlock. Lastly, it should have an easy but secure and effective fastening.

There are various tendon boot designs and you need to choose one which suits your purpose best. If you need a tendon boot to protect the tendons of a jumping horse then use an open-fronted boot which will leave the front of the horse’s leg exposed and keep his sensitivity to knocked poles while protecting the tendons from being struck by the hind feet. For polo a much more substantial boot is required to go over polo bandages to give protection from hind-foot strike, protection from other horses during riding off and the possibility of being hit by a mallet.

A speedy cut injury often occurs when fast work is being carried out, it is usually a high cut either just under the knee or hock. This boot is a brushing boot that is made much longer and higher than a conventional brushing boot thus extending the area covered to protect the lower knee and hock. Again, they must be well made and mould to the leg staying firmly in place during any fast galloping or jumping.

These boots were designed for the performance horse or pony; they give exceptional protection and support and should be used for specific purposes. The boots warm the horse’s legs creating a moist environment that enhances blood circulation, and support and protect the legs from side impact and concussion. They can be used for horses that are sound and competing in rigorous conditions such as cross-country jumping or FEI carriage marathons or for fast schooling work or prolonged trotting work on the road.

Most of our work with horses is preparation for competition and not actually competing, it makes sense, therefore, to protect and support the legs so that we can actually get to the event with a sound horse. They are also very good boots to use for: a horse who has had an injury and is being brought back into work, older horses with weaknesses and horses prone to tearing around their paddocks with gay abandon thus running the risk of the vet having to be called yet again.

It is important to get the sizing right and if you are looking for a high degree of proven protection and support make sure you buy the correct boot and not a lookalike. For horses with long hind cannon bones there is a high-top version that is 2in longer than the standard boot.

These are specifically designed to protect the ergot and the underneath of the hind fetlock joint and are mostly used for the training and working of Western horses and polo ponies. These horses in particular use sliding halts in their work, that is, as they halt or turn in a fast gait, the hind joints are under so much pressure that they are actually pushed into and slide on the Hoof.

The boots are made of thick neoprene with a thickly covered inner brushing pad and an extra rubber pad covering the lower fetlock area cupping the back of the fetlock joint. New versions now bend under the horses ergot and extend at the back to wrap around the upper back pastern area so that no dirt can slide into the boots as a polo pony or a reining horse slides to a halt.

These incorporate a brushing boot and a bell boot in one boot. Some versions do not allow for enough freedom of movement but Professional’s Choice have now designed a hinged version that does not inhibit any movement. This is the ultimate in all-round protection. You need to make sure that the boot is firmly secured to the leg so that it does not slip down as that will cause the bell boot to be pushed lower on the foot as well. The boot should be wrapped firmly onto the horse’s leg but you should be able to get an index finger comfortably into the boot at the top.

Fetlock boots are designed to protect the fetlock area on the hind legs and are most commonly seen on jumping horses. They come in a variety of materials from neoprene to leather with neoprene or sheepskin removable inner pieces. They are designed for inner fetlock joint protection only and if your horse is prone to brushing elsewhere on the hind limbs, you really need to have a full brushing boot instead.

Also called bell boots, these boots are specifically designed to protect the coronary band and the bulbs of the heels. They are usually worn only on the front legs but can be worn all round in, for instance, the marathon section of carriage driving trials as extra protection is often needed, particularly when more than one horse is being driven. The ordinary overreach boots, either the pull-on version or the tab or Velcro fastening types, all give very good protection against overreach wounds caused by the horse striking himself but the padded bell boot also gives a high degree of protection against treads received from the close proximity of other horses, as in the game of polo for instance.

These boots are a piece of dense rubber tubing with a leather strap running through the middle which is fastened around the horse’s back pastern on one hind leg only. They are used for a horse that continually brushes in one place, just marking the coronary band on one hind leg, for example, each time he is worked.

These come in 3in or 4in widths and in a large variety of colours. Exercise bandages should be put on very evenly and firmly and always over Gamgee or Fybagee. The securing tapes should be flat and only as tight as the bandage, no tighter, the fastening should be on the outside of the leg and, to ensure they remain safely fastened, either sewn or bandage-taped into place.

Polo bandages are available in a wide variety of colours and are designed to be bandaged directly onto the horse’s leg. They are made of soft stretchy Polatec and mould to the shape of the leg as you bandage. They can be used to just cover the cannon bone and upper fetlock area or be bandaged lower to cover the fetlock joint as well.

They are very useful for supportive protection for youngsters with extravagant action as you can bandage down to the pastern and then meet the bottom of the bandage with overreach boots. Polo ponies will need additional protection in the form of skid boots over the bandages on the hind legs, tendon or heavy brushing boots on the front legs plus bell boots on the front hooves to prevent the heels being trodden on.